The Things of Warsaw / Room of Photographs

Photographic print documenting the returns of Varsovians to the ruined city

This is one of the most famous photographs by Zofia Chomętowska (1902–1991), a renowned photographer, famed user of a Leica camera, who launched her career in the 1930s. Chomętowska herself considered the photograph as one of the most important in her rich oeuvre. The image originates from a series documenting the returns of Varsovians to the ruined city, created in the spring of 1945. The black and white print, which belongs to an extensive set, was produced by the photographer for the exhibition Warsaw Accuses, opened on 3 May 1945 at the National Museum in Warsaw.

The presented photograph perfectly illustrates the reality of the first months following the war in the critical area of the city. Since the Germans detonated all the bridges, crossing the Vistula River became one of the most complicated tasks in daily life. Thousands of people travelled the distance between the ruined city centre, gradually cleared of rubble, and less destroyed Praga, where makeshift life was possible. Connections between the left and the right bank of the river were served by a temporary bridge and boat transport. As Zofia Potocka née Tyszkiewicz (1893-1989) wrote in her unpublished memoirs: “The pontoon bridge allowed the nation to cross the river by carts, lorries, etc., vehicles. One could also cross by boat, the latter means of transport suited us best, it was fast and without queues, as often one had to wait very long to access the
bridge, overtaking was prohibited.”

The photograph, similarly to other sequences from the series, demonstrates Chomętowska’s photojournalistic edge. A special appeal characterises the images that show a crowd of people heading to the Praga bank of the Vistula River in Warsaw, which highlight the power of human force confronted with a dead wall of rubble. The Museum collection comprises a set of photographs by Zofia Chomętowska whose themes revolve around Warsaw from the period between the two World Wars, the German occupation, the postwar years 1945–1946, and from the second half of the 1970s, which embraces approximately 5,200 negatives and 350 sets of thumbnails. The collection was donated by the photographer to the then Historical Museum of the City of Warsaw in the years: 1975, 1979, 1989 and in 1992 by her family. 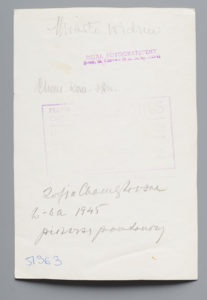