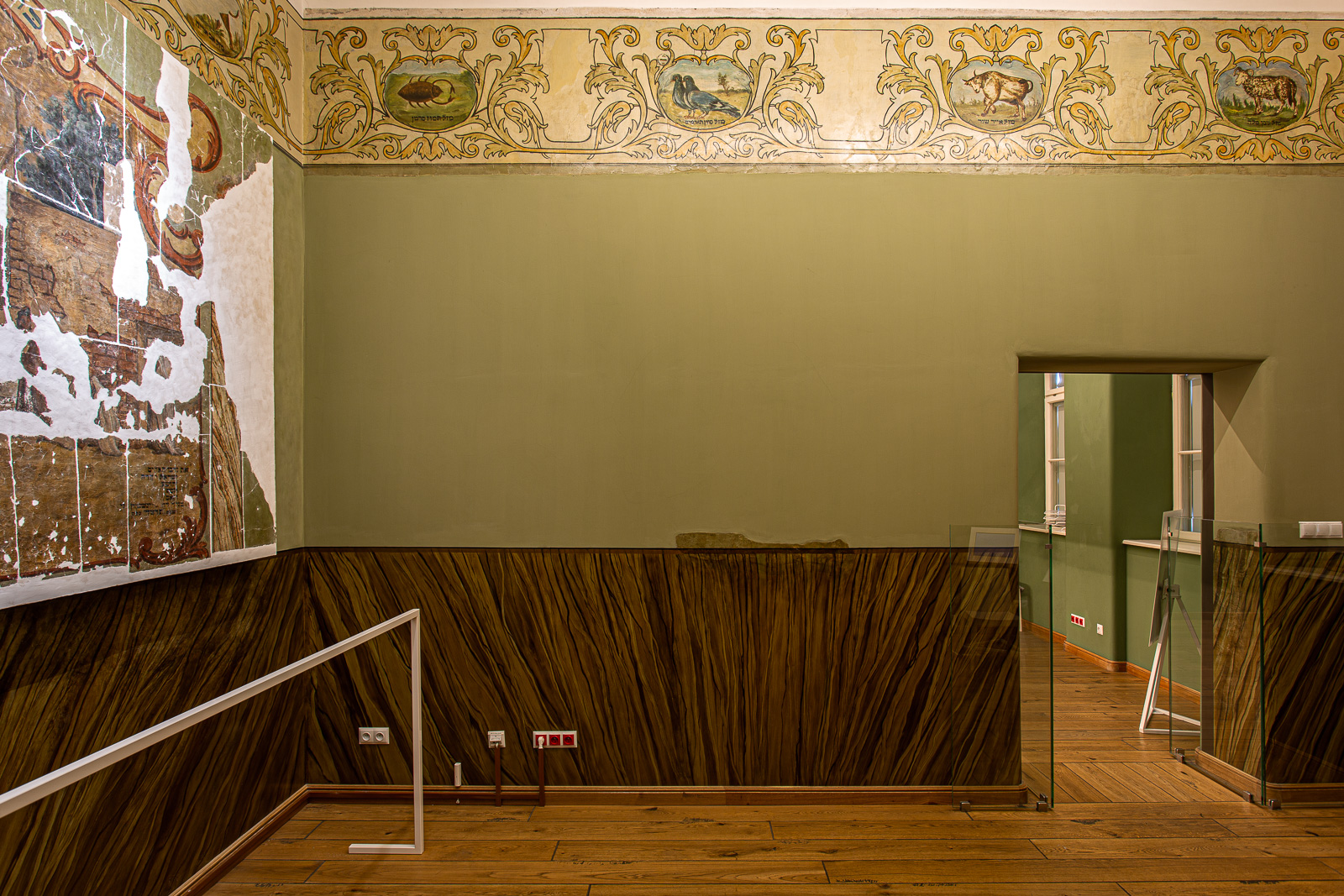 The remnants of former Jewish prayer rooms, together with their unique painting decoration, are located on the ground floor of the annex in the courtyard, at the rear of the tenement house at 50/52 Targowa Street.

They occupy two small rooms in an enfilade, with the total area of about 50 square metres. There are many indications that they had once functioned as separate prayer rooms, each with a separate group of users. It is also possible that next door, in the section of the building which was destroyed during the war, there was yet another similar room.

History of the annexes

Prayer rooms were most likely used by the residents of the building or its vicinity, perhaps also by the merchants—both local and travelling.

Prayer rooms at 50/52 Targowa Street testify to the fact that a great number of private prayer houses was in operation in old Warsaw. They were located both in the tenement buildings and in the annexes or other outbuildings located within a tenement’s plot. Such a fragmentation of religious worship was typical for Warsaw, and deeply rooted also in the tradition of the districts located on the right-bank of the Vistula river.

According to the census of 1926, there were at least 38 such prayer houses in the district of Praga, including 18 prayer rooms along Targowa Street alone. Private prayer houses attracted small groups of worshippers and played a major role above all in daily religious practice. For grand religious celebrations, the Jewish community would gather, e.g., in the synagogue on the former Szeroka Street.

Traces of Jewish prayer rooms located within our premises were first noted already in the second half of the 19th century. In 1869, the address (back then ‘Wołowa 156/157’), along with the name of Szmul Ekstein, was entered in the Warsaw prayer houses registry for the first time.

During the war and in the postwar period, the annex building fell into ruin. After the end of the war, the property was managed by the Municipal Office. It is known that the western room was used as a storeroom and workshop, or perhaps an indoor garage (which caused the devastation), while the eastern room housed a tailor’s shop (hence its slightly better condition). Many layers of mortar and paint kept the paintings well-hidden until the end of the 20th century.

History of the paintings

Painting decorations were discovered by Janusz Sujecki and Jarosław Zieliński in the years 1996-1999, and largely uncovered in 2005. A total of about 20% of their former surface has survived until the present day. The paintings were entered in the register of monuments in 2001.

In the eastern room, we can admire a decoration which takes the form of an ornamental frieze under the ceiling. These are the signs of the zodiac in the Hebrew calendar, placed in alternate fields of the composition. The preserved signs are: Taurus, Twins, Cancer, fragments of the signs of Leo, Virgo and Libra, Scorpio, Sagittarius, Capricorn, Aquarius and a fragment of the sign of Pisces. The sign of Aries did not survive. The whole forms a belt about 75 cm wide and running at a height of about three metres.

The main element of the paintings in the western room is a scene showing Jews praying at the Wailing Wall in Jerusalem. Interestingly, despite the prohibition on personification in Judaism, we can spot human figures that survived in fragments, and even partly their faces. According to the foundation inscription at the bottom of the composition, the painting was funded in 1934 by the brothers Israel Yehuda, Yehoshua, Yosef and Ze’ev—sons of David Grinsztejn (Grinsztajn).

Above, a depiction of Rachel’s tomb in Bethlehem has been preserved, integrated into the decorative bordering on the walls. We can also see the signs of the zodiac here, however due to the very poor technical condition of the room, far fewer representations have survived until the present-day in comparison to the eastern prayer room (the surviving signs are: Aries, Taurus, Twins, Cancer, fragments of Leo and Libra and the inscription accompanying the sign of Pisces). The lower parts of the walls are decorated with a scumbled wainscot which was reconstructed on the basis of the preserved fragments.

We still don’t know much about the Jewish residents of the tenement buildings, nor of those who attended the prayer rooms in the annex. Apart from the paintings, no other items from the original interior design have been preserved, and there are no surviving photographs documenting the way they looked or operated. The prayer rooms’ history is still waiting to be discovered.

We hold a fragment of the Torah scroll in our collection, recovered from one of the Warsaw tenement houses. It is on display as part of the prayer room exposition.

The prayer rooms are an element of the permanent exhibition of the Praga Museum of Warsaw, available for viewing with the entry ticket to the main exhibition.